Facebook is an important communication tool to me. Most of my fellow students don’t use iMessage or Twitter DMs, so we talk on Facebook. However, I seem not to be able to just check my messages on Facebook. Instead, I wind up scrolling through the News Feed for a couple of minutes each time I visit Facebook in the browser.

I recently looked at about 30 News Feed posts in detail and discovered these three things:

I concluded that I don’t need to read the News Feed, so I wrote a custom stylesheet that hides it. This is the result: I’ve been using “Quiet Facebook” for a week now and I’m happy with it, so I put the CSS on GitHub.

I just embed the stylesheet via Safari’s settings but someone could certainly build browser extensions that load the stylesheet from raw.github.com and toggle it when the user clicks a button. Feel free to submit pull requests (or suggest a better name for the whole thing)!

Mark would have written this post himself, but is busy helping out with everything going on right now, so I’ve been asked to explain why we’re launching this expansion.

We listened to what you guys had to say and built extra privacy controls that we launched last week. If you’re uncomfortable with regional users being able to see you on Facebook, you can always change your privacy settings to prevent people from finding you in searches and communicating with you. Also, we’ve built out a bunch of tools that will help verify new users and prevent spammers from bothering you. You can read about these tools here.

Facebook is still yours, for you and your friends (all of your friends) to connect with each other and share information. 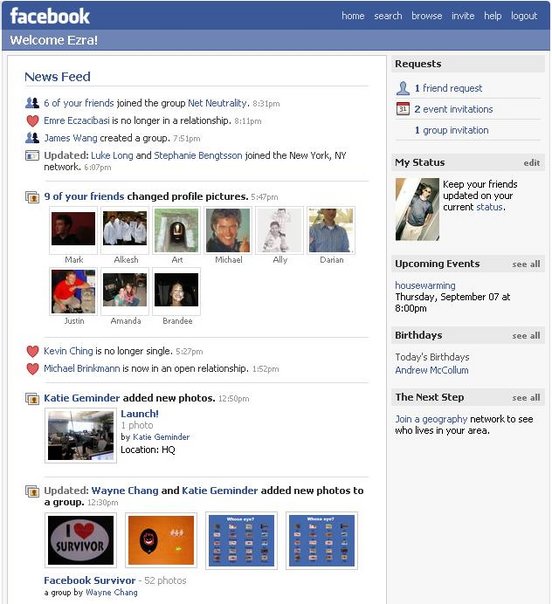 News Feed highlights what’s happening in your social circles on Facebook. It updates a personalized list of news stories throughout the day, so you’ll know when Mark adds Britney Spears to his Favorites or when your crush is single again. Now, whenever you log in, you’ll get the latest headlines generated by the activity of your friends and social groups.

Mini-Feed is similar, except that it centers around one person. Each person’s Mini-Feed shows what has changed recently in their profile and what content (notes, photos, etc.) they’ve added. Check out your own Mini-Feed; if there are any stories you don’t like, you can remove them from your profile.

News Feed and Mini-Feed are a different way of looking at the news about your friends, but they do not give out any information that wasn’t already visible. Your privacy settings remain the same – the people who couldn’t see your info before still can’t see it now.

These features are not only different from anything we’ve had on Facebook before, but they’re quite unlike anything you can find on the web. We hope these changes help you stay more up to date on your friends’ lives. 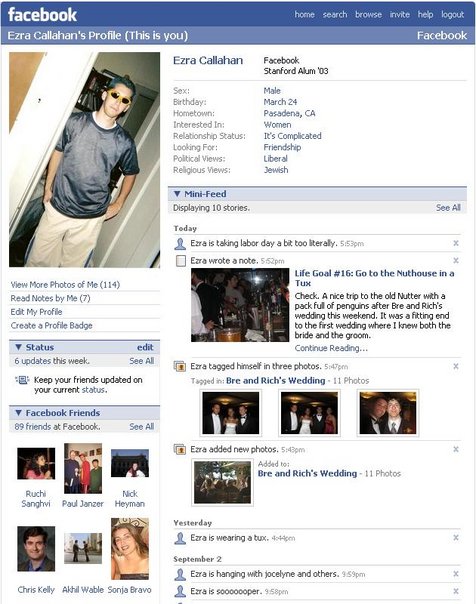