When you go down Rua Augusta, in Chiado, you have to look at the shop’s windows – that’s why they’re there, in a row, decorating the big corridor. It is a shopping area, one of the most important in the city. As such, it is understandable that the shopkeepers don’t think it very amusing having two musicians performing in front of their establishment – even if well-rehearsed (a jazz melody touching perfection) and not inexperienced. The shoes and the hats lose to the sound of the instruments. “Just two hours ago the police control came wanting to know what we were doing here”, stated Robert Würz, still with his sax about his neck. “But they check everything to us.” They? “They” are the team responsible for Würz’s presence in Portugal. You see, both Robert and his colleague (for more than five years) Jürgen Meyer-Metzenthin are special guests of a project – a partnership between TSF radio and the city hall – that intends to turn Lisbon into the European Capital of Street Music. 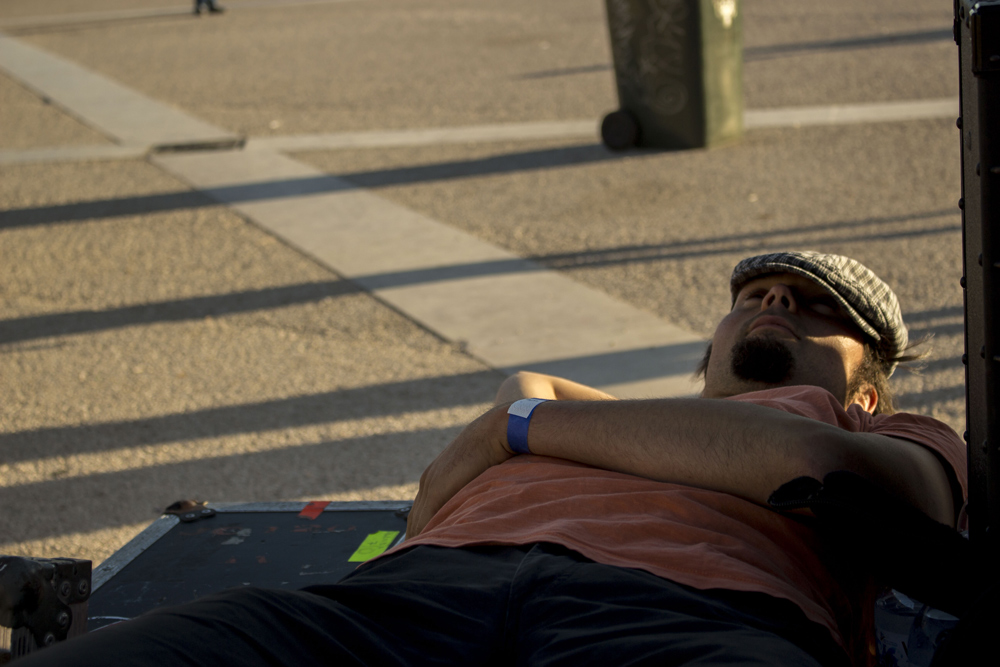 This is an original concept – and an old one – by journalist Fernando Alves, which was made possible this year by taking advantage of the stage that had been set up for events related to the World Cup. However, this stage was only used on the last afternoon – a detail in the middle of a week where it was possible to enjoy live music in almost every corner of Downtown Lisbon. Altogether, and not counting with this last day, there were seven different performances by musicians of different nationalities with very little to do with each other. Although, in Paulo Baldaia’s words, TSF director, more than animation this was “the start of the debate on how to organize Lisbon’s street musicians. The city hall took part in the discussion and some things are changing. Taxes are extremely high, there’s a lot of bureaucracy and we believe things will change and Lisbon will become a reference for street musicians.” 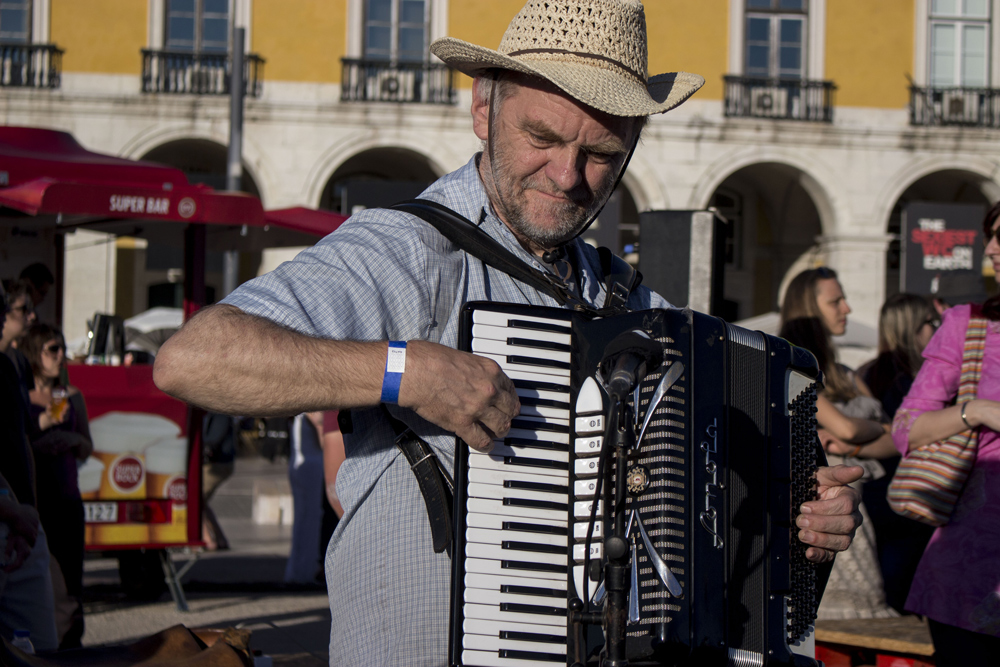 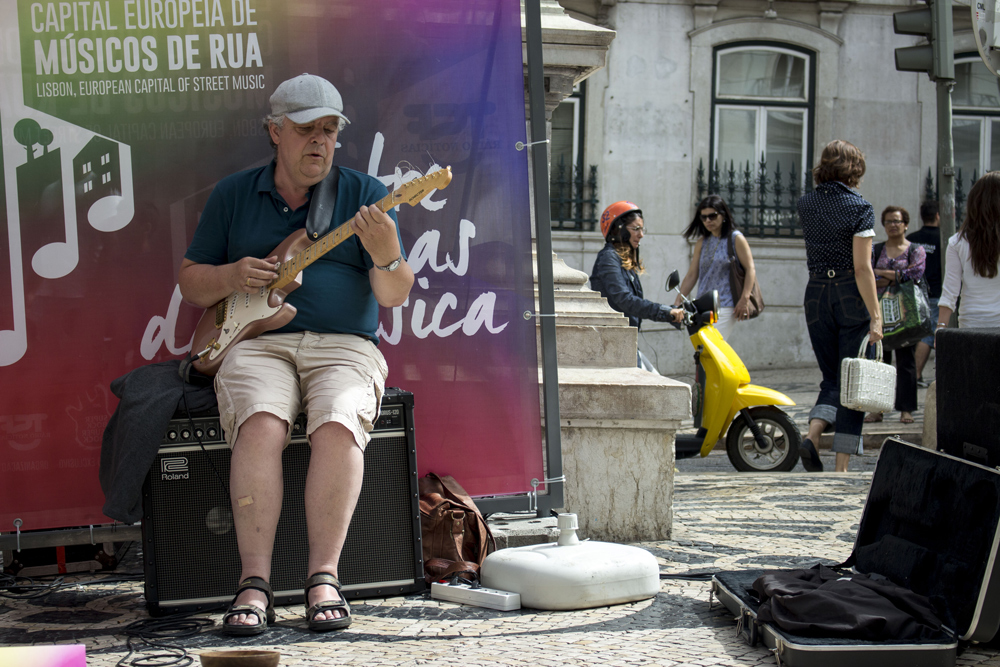 In Germany things are a little different. Street artists have it easy since supervision isn’t as strict – “they even pretend not to see us”, says Robert. A joke Pablo Javier Subatin, an Argentinian musician living in France as of last year, would have some difficulty making. As is turns out “it’s completely forbidden to perform in the streets of Paris!” Luckily, TSF’s team found him mid-performance in the République subway station. “The subway is private and we can play with an authorisation”, he explains. 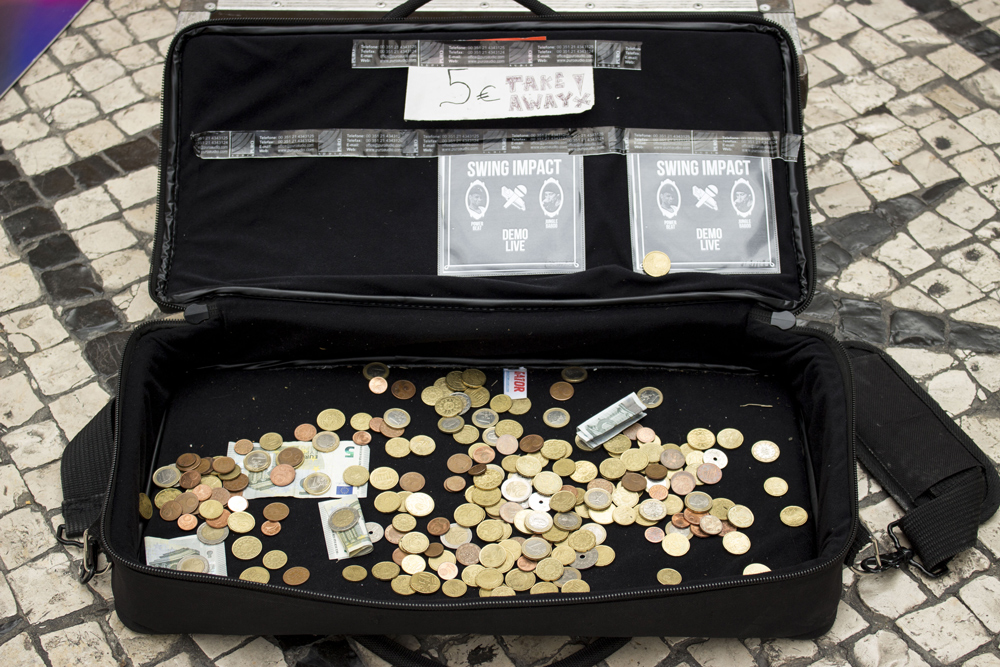 But it seems as though street musician’s paradise is in the south coast of England. Who says it is João Marques – one of the musicians who plays here year round and has nothing to do with the project. “Brighton. Yes, that could be considered the capital of street music.” Pas de Problem – people, brass woodwind instruments, percussion and party – left the downtown streets for some days and went testing busking in Her Majesty’s lands. “[Busking is] a verb they use to refer to the act of playing on the street. It even sound more dignified – they have a specific verb for it. For us [portuguese] it’s just ‘playing on the street’.”

Pablo was at the top of Rua Garrett, close to the subway, under poet António Ribeiro Chiado’s pointed up finger and in front of a too much coloured board where it could be read that Lisbon is the european capital of street musicians – more like a board featuring a small screen (playing on a loop the presentation videos of the different musicians involved in the project) and an allusion to the Super Bock Super Rock festival. Pablo, sat down, paying no mind to what was happening around him – an acoustic guitar worthy of all the attention –, played until he was allowed to play. As it so happens, that spot had already been claimed by the Cape Verde musicians who often cheer up late afternoons in front of Brasileira Café. The strategy was: one plays while the other takes a break (with more breaks – and longer ones – for Pablo). “This is their work place, I don’t want to invade it.” 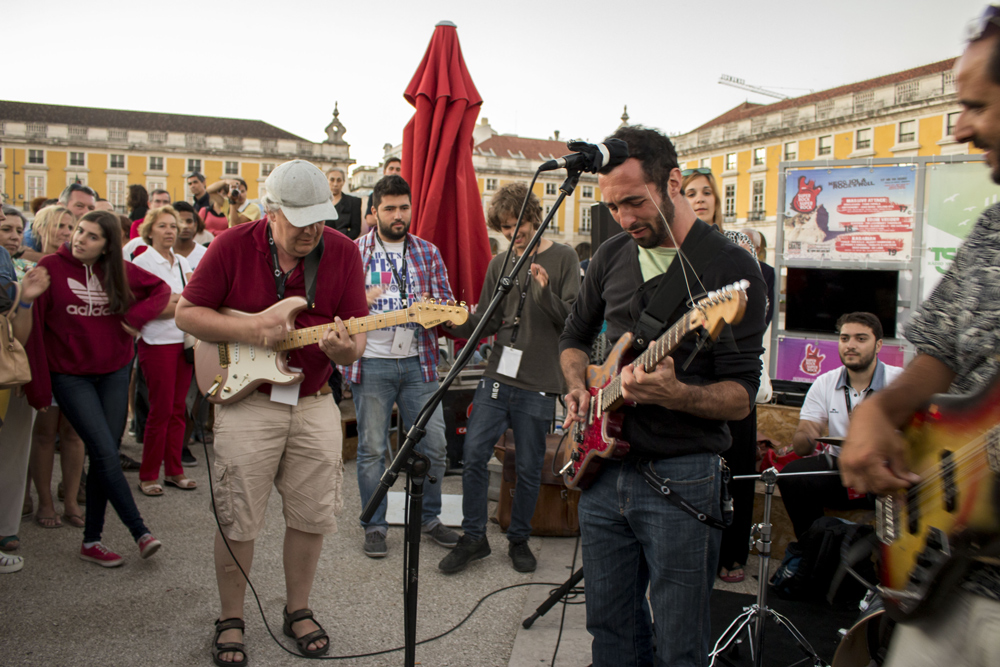 Jonathan Flandinet wasn’t also indifferent to the group hailing from Cape Verde – the only Lisbon street artists he’d had contacted with until then. He himself came here (from Brussels) to show his abilities in the art of human beat box. Black snapback, with a camo brim, matching shorts, a brown t-shirt with Jones’ (Black Belt) face and black Reebok boots – a figure in permanent movement (hyperactive style) in alliance with the (many) sounds he made. At the end of Rua do Carmo, near Rossio, Jonathan (or should we call him Jungle Baboo?) was, little by little, surrounded by people who couldn’t ignore him. “Ladies and gentlemen, representing the Lisbon Portugal Street Artists, a different style combination… here we go” and then blues, jazz, hip hop, reggae or something more electronic would happen. 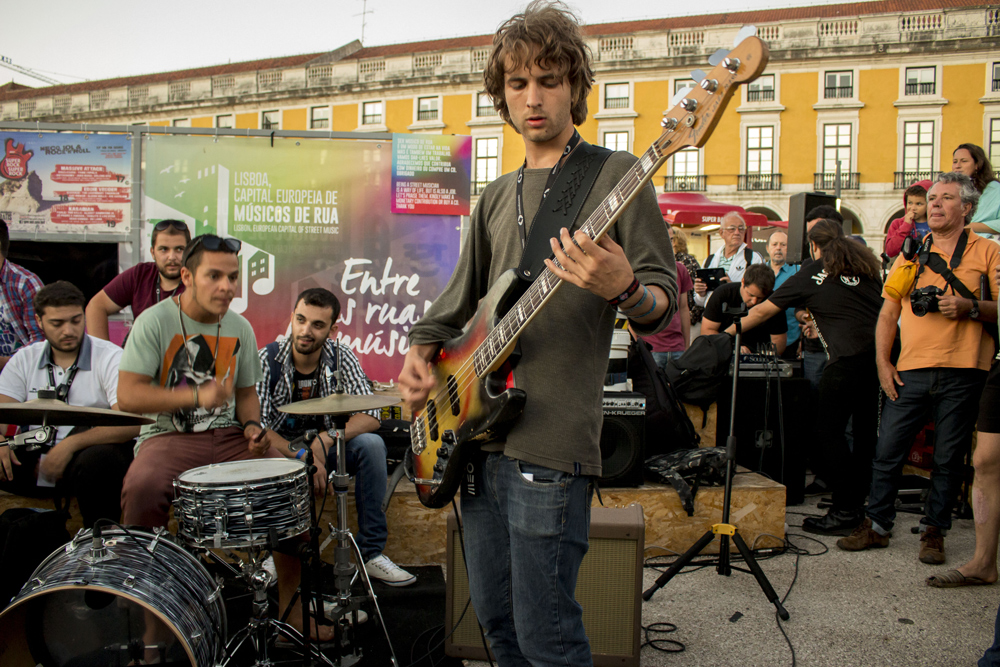 A performance which involved a loop station processor (it allows you to record individual sounds and then play them together in a loop), tambourines with guitar strings, small cymbals, a long metal tube (like the one in a parasol) and a child, probably less than three years old, who stole the spotlight from him. “Sometimes people dance during my performance. Maybe that’s a sign of a good interaction with the audience. Moreover, on the street it’s important to reach everyone (young and old) – a multi generation thing. We can’t focus on just one aspect.”

Jürgen had already visited Portugal on an other occasion. The guitar player was here at the year before the revolution – some fun holidays in Torres Vedras. “I remember playing guitar on the beach – music, drinks, cigarettes… Now this is completely different. I was very young. It’s an unknown country for me.” An unknown country for Jürgen and one which takes premises permits very seriously – with cops showing up in the afternoon at the corner where Rua Augusta and Rua da Assunção meet to inquire about the noisy illicit activities. 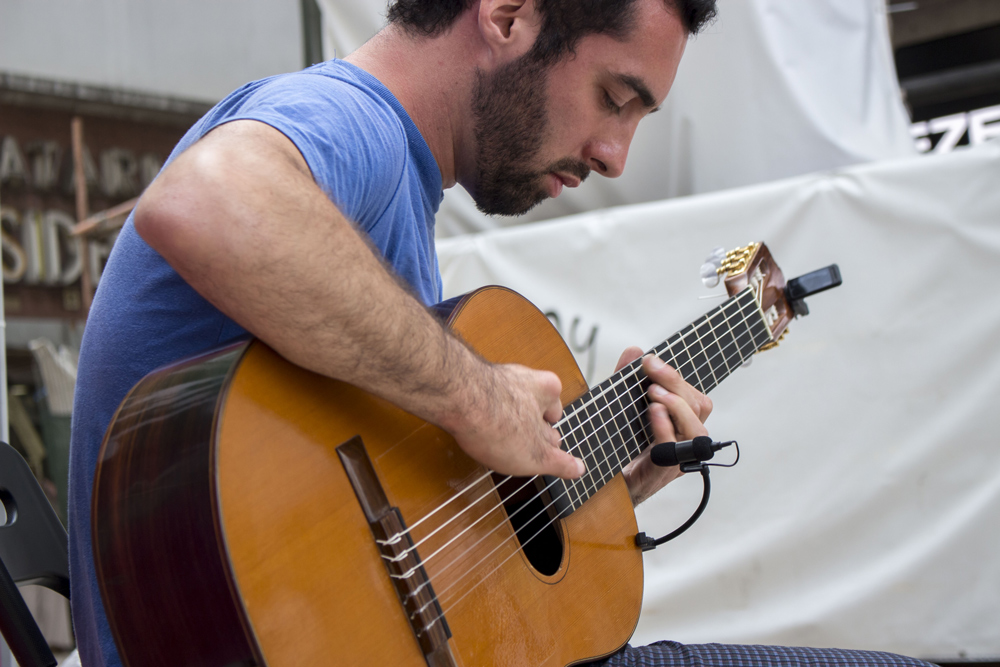 Even Pablo already knows that musicians here don’t find it very amusing having to pay to use the space – the space which is the street. João also knows it. But he works here. “I think Lisbon isn’t a city very accepting of street music: you need a permit and in most cases people get fined. It isn’t a very worthy job here. And now it seems to me like a bit of a façade the city hall supporting the organisation of this event.”

Anyone who stops to pay attention to the artist’s work always feels compelled to express their opinion. You can say you liked it, that you didn’t like it, you can (in a very portuguese manner) try to have them sing a fado for a tenner or talk about what’s troubling your soul. On the last day of the event, at the premises set up in Terreiro do Paço, a woman asked at what time Vitorino would start playing. “It’s just that I don’t live here. I came here on purpose and regret not having seen what happened during the week. Lisbon is so big, I don’t get why they have to do everything here in downtown.” An other woman with her agreed with her head. “Besides, we could have more portuguese artists!” – a criticism made not only during this conversation. 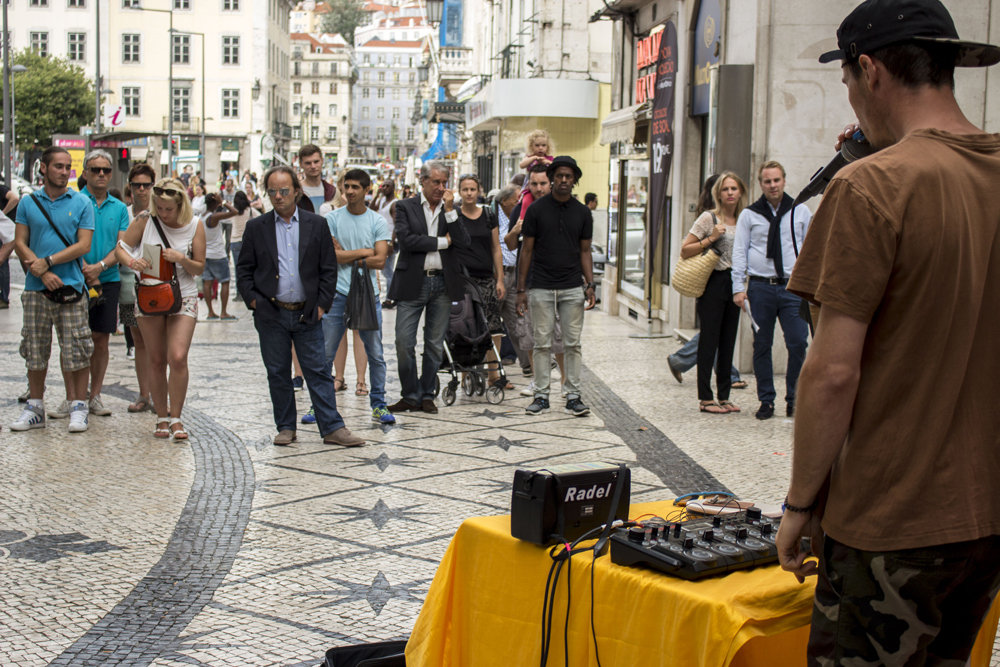 But, like Paulo Baldaia explained, “our goal was to bring what happens in Europe, bring the discussion here. That’s why he had a representative of each city, so, there was also a portuguese representative [Rini Luyks – the man responsible for the accordion melody automatically attributed to Rua do Carmo]. Furthermore, on this final concert we had not only the street musicians who played all week long, but also two big names in the portuguese street musicians scene: Vitorino, accompanied by his band, and Kumpania Algazarra, which have history in street music.”But the debate isn’t about the artist’s nationality – we’re talking about working conditions here. Lisbon still “isn’t a capital of street music.” Who says it is the saxophonist of Pas de Problème.